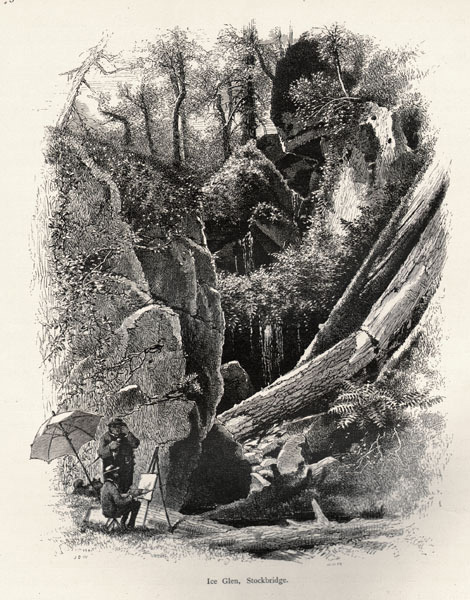 Editor's note: have you wondered about the Great Stockbridge archeological dig? Here is the back story by Rick Wilcox, former Stockbridge Chief of Police and current Stockbridge historian.

Fortuitously Field's description contained information that was not found in any other history, to include the weight of the ox at 1100 pounds, Native custom of "men first and then women, according to custom", the presence of the Rev. John Sergeant, Jr. and possibly most important a Mr. Deane. [James Dean] Additionally the Continental Congress had appointed Timothy Edwards, Volkert P. Douw of Albany and General Philip Schuyler Indian agents of the Northern Department, providing a second reason why Edwards would be chosen by Washington to deliver the message and deliver the ox.

James Dean became an Indian Agent in New York, was involved in land speculation, acquired a judgeship and later founded the town of Westmoreland, New York. His work in New York brought him in contact with the Stockbridge Indians at New Stockbridge, New York. 1783 was a time of transition for the Stockbridge people and Dean may well have been involved in their resettlement. In addition, Dean's sister Esther Colver (Culver) and her husband Nathaniel moved to Stockbridge, where four of their children were born.

Field also stated that the feast took place near the residence of King Solomon, alias Solomon Uhhaunauwauaunmut, who replaced King Benjamin Kohkewenaunant to become the tribal sachem around 1771. Solomon was given the rank of Captain during the Revolutionary War and participated in the Battle of Bunker Hill leading a company of Mohican volunteers. Solomon died in 1777, at age 50, some six years before the end of the war. Given his leadership role in the tribe during the war it would seem fitting that a celebration would take place on his home site. Finally, there was a need to establish that an ox roast was a common form of celebration c. 1783. Two ox roasts in which Washington was a participant were uncovered and information about numerous other ox roasts indicated it was a common practice during the Revolutionary War era.

Stockbridge resident and New York Times map maker Vaughn Gray placed a footnote at the bottom of some of his 20th century Stockbridge maps that read: "Drawn somewhat by conjecture." That would most certainly apply to the difficulty in trying to locate on a map either the ox roast or Solomon's home site. Indian Town when created in 1737 was six miles square or 36 square miles or 23,040 acres making up present day Stockbridge and West Stockbridge. Finding the remains of an 1100-pound ox and items related to its roasting might be something akin to finding a needle in a haystack. However, locating the home site of Solomon Uhhaunauwauaunmut, it turns out, was more like assembling a jigsaw puzzle, albeit one of many pieces.

Some of pieces of the puzzle, it turns out, were already available, as several years ago I had spent a number of months gathering approximately 250 Stockbridge Mohican deeds from the Berkshire Middle Registry of Deeds in Pittsfield and the 18th century handwriting encouraged me to transcribe them for ease of reading. Common practice in deed research would be to start with a current owner and trace back in time until reaching a Mohican property owner. That practice, however, can take many hours and require looking at hundreds of deeds for single plot of land. A more practical approach in this case was to create a jigsaw puzzle of deeds from the 18th century. To add to the difficulty, those deeds did not create a snapshot of a moment in time but could cover a spread of 20 or more years. Fortunately most of the Mohican deeds gave sufficient description of current and previous owners allowing the puzzle pieces to fit.

Because of his standing in the tribal hierarchy, Solomon Uhhaunauwaunmut had been granted a large number of parcels of land containing hundreds of acres, so the key was to find a reference to his home lot. Fortunately, there were a number of references to his home lot in historical literature and primary source documents. That resulted in locating his home lot of about four acres of land on the Town of Stockbridge Ice Glen property. Primary source documents mention Solomon having a house, suggesting an English style home as opposed to a wigwam. The pieces of the puzzle having been assembled, now the search would begin with the archaeologist seeking the proverbial needle in the haystack.