The Sewers of Stockbridge — Part I

Your committee, Frederick S. Aymar, Allen T. Treadway and Marshall S. Heath, beg leave to submit the following report... it was feared the committee was not empowered to spend money... the fact that several influential citizens were deeply interested in the matter, the committee felt justified in engaging the services of Mr. Freeman C. Coffin of Boston, who is one of the leading sanitary engineers of the state. The expense of his services has been divided equally between town and a few interested tax-payers, nearly all of whom are non-residents.

We recognize that the town should respect the wishes and desires of this class of our citizens, and the subject of drainage for Stockbridge is one in which they are greatly interested.

The field which has been selected is he one advised by Mr. Coffin after thorough investigation and after consultation with Mr. Goodnough. Whether or not Mr. Barnes would be willing to dispose of the lot at a fair price has not been ascertained. (Barnes lived at 5 North Church Street and owned land to Larrywaug Brook and south to the river. The field contains the current sewer beds.)

From the office of the State Board of Health, January 8, 1897, Secretary Samuel W. Abbott writes in response to receiving the town plans... The plan shows that it is feasible to collect the sewage from practically all of the village and deliver it by gravity upon the filtration area. The exclusion of storm water from the sewers as proposed is very desirable, since smaller sewers will be required, and the quantity of sewage to be purified will be much less than if storm water should be admitted.

The area proposed for the disposal of the sewage appears to be the most suitable... test pits have shown that beneath a layer of loam and soil at the surface covering a layer of sand two to three feet in thickness... according to the plan 2.2 acres of filter beds can be prepared there... on account of the comparatively small elevation of the filter beds above the level of the water in the river, their operation may be interfered with occasionally by freshets...

Precious Document of Stockbridge Past 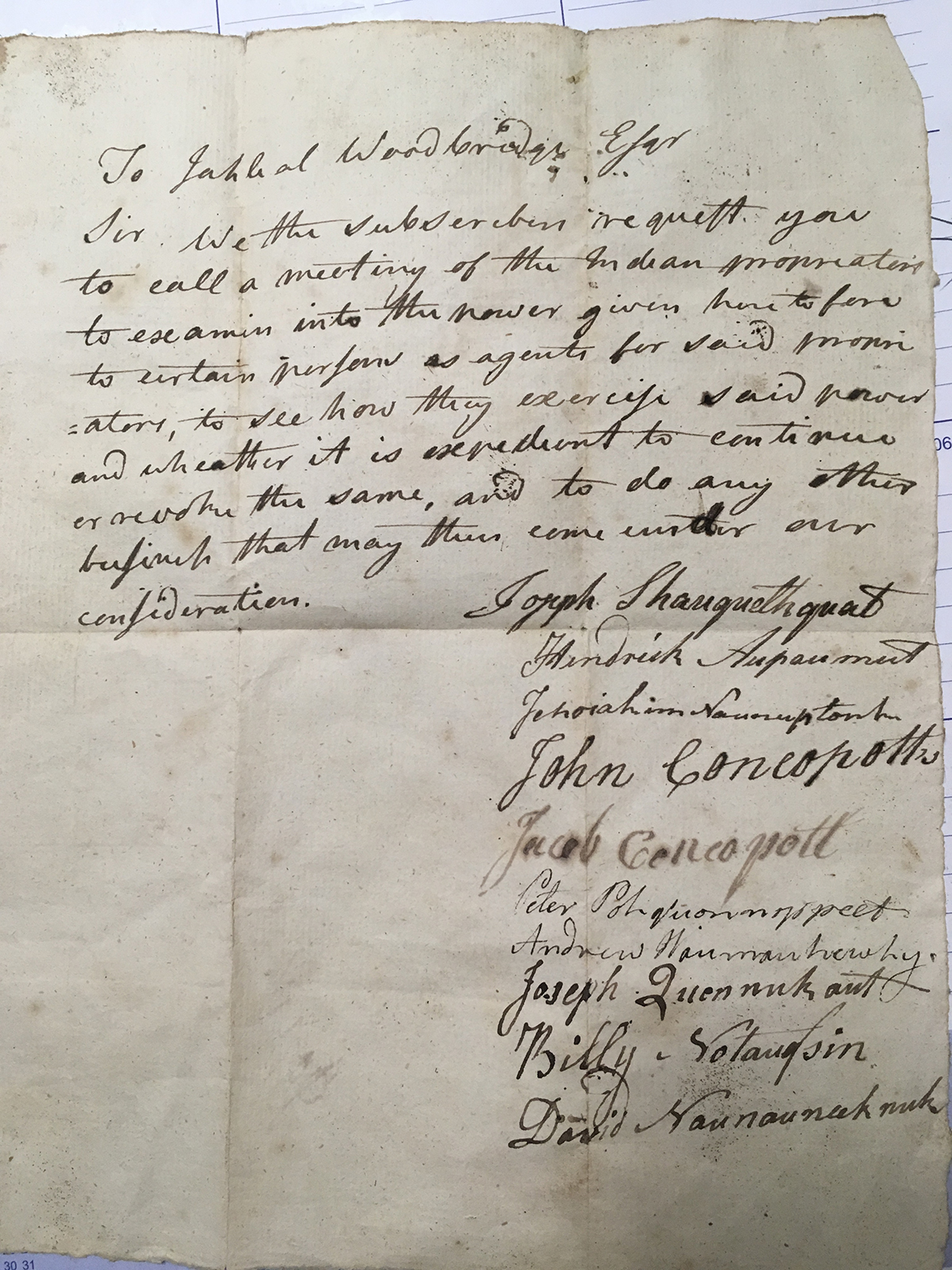 To Jahleel Woodbridge Esqr.
Sir. We the subscribers request you call a meeting of the Indian Proprietors to examine into the power given here to fore to certain persons as agents for said proprietors, to see how they exercise said power and whether it is expedient to continue or revoke the same, and to do any other business that may thus come under our consideration.
Joseph Shauquethquat,
Hendrick Aupaumut,
Jehoiakim Naunuptonk,
John Concopott (Konkapot),
Jacob Concopott (Konkapot),
Peter Pohqunnoppeet, Andrew Waumauhewhy,
Joseph Quennukaut,
Billy Notuaqssin,
David Naunauneeknuk
Written in 1780.